I had a lovely weekend in London
(but tiring!! I'm still aching from the half marathon on Sunday! But very pleased that me and my sister in law completed it! Hooray!!).
On Saturday I popped along to the Origin Craft Fair in Spitalfields Market....there were lots to stands to see so I thought I'd share some of my favourites.... 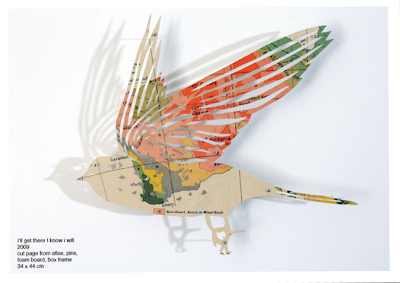 Being a map fan this gorgeous wall art by Claire Brewster really caught my eye... 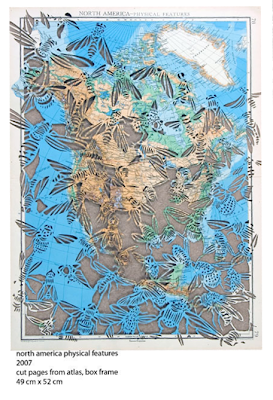 I unexpectedly picked up my first christmas present from Thornback and Peel! :D

Here's some work below from Lauren Van Helmond....I love her characters, great work: 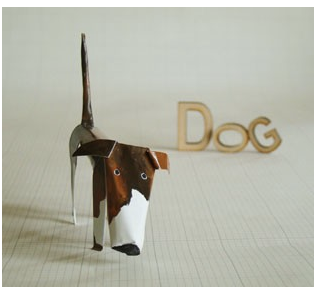 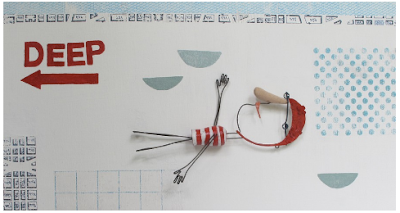 This thread art really caught my eye, I hadn't seen anything like it before, it was very striking.
All created by artist Debbie Smyth. Debbie has an exhibition on at the moment called ThreadBare which is at Manchester Craft and Design Centre until the end of October.
I wish I was closer to be able to check it out more easily....so you'll have to let me know if you go! 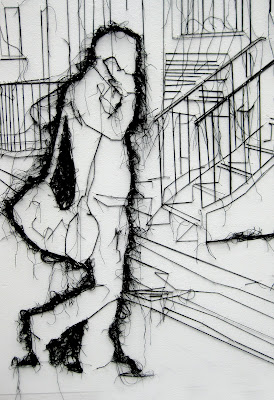 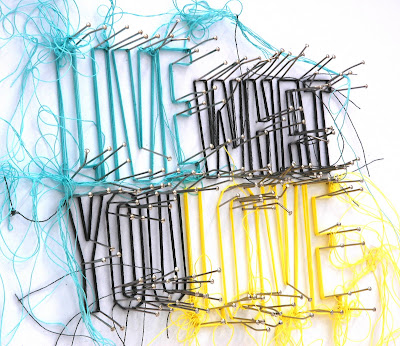 and last but my no means least my lovely friend Abigail Brown had a lovely stand displaying her feathered creations! She really is a super talent...she will be at Origin until wednesday and I would definitely recommend a trip! Book online first if you can. 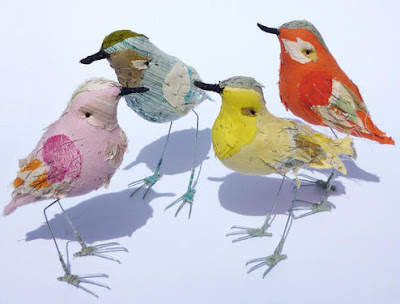 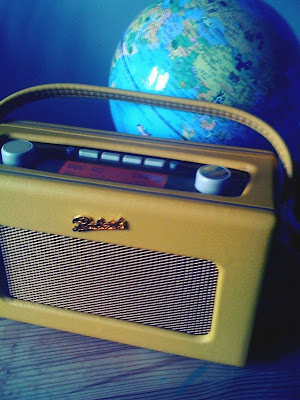 My friday just got a whole lot better with the arrival of this beauty! Such a big treat! I have been eagerly awaiting Amazon to show up with it!
This week has flown by but Autumn seems to be creeping up on us here in the UK...I can feel that chill in the air and the leaves are starting to crisp!
Soon be time to get the winter woolies out!
I'm off to London town this weekend to visit my talented bird maker friend Abigail Brown at Origin, catch up with my brother and soon to be sister in law Abimaro (check out here beautiful voice here)....THEN its half marathon time on Sunday! Uh oh...what have I let myself in for!?!
Hope you've all got a lovely weekend planned!
at 14:43 1 comment: 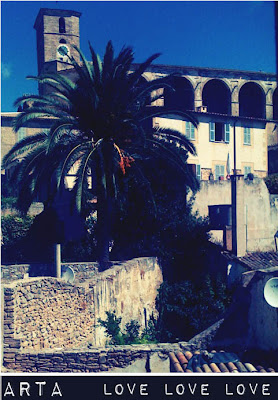 I've had a short week again this week after a lovely long weekend in Arta, Majorca...it was very nice relaxing with friends and consuming lots of good food and drink....we even had an evening dancing in the street due to the local festival being on while we were there. Oh it was Great!
Autumn seems to be well and truly kicking in now...I love all those fallen crispy leaves!
at 18:05 1 comment:

check out this fresh new blog!

Here's a lovely brand new blog from friend Lucy Belfield....she produces super work so I certainly think this blog is one to keep your eye on!
Check it out here
I'm off away again! lucky lucky I know!
Its a long weekend in sunny Majorca!
oh I can't wait for that sun on my skin....with sfp of course!!
Have a great weekend everyone...make the most of what is left of summer! :D
at 20:55 2 comments:

uh oh!! only 3 weeks to go til I'll be running over 13 miles as part of Run to the Beat in London with my sister-in-law Louisa.
I've been putting in some hard training for a while now and I'm getting there...it's a big achievement for me as when I started running I couldn't even run a mile. 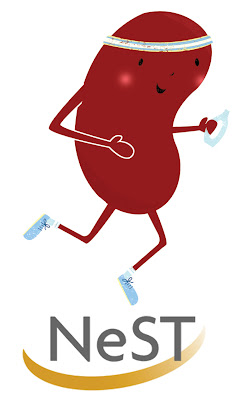 We'll be raising money for NeST, which is a charity that is hoping to find a cure for Nephrotic Syndrome. My other sister in law has been diagnosed with this kidney condition which has little awareness and often affects young people. You can read more about it here
and if you would like to show your support click here.
It would certainly be much appreciated!
I created this running kidney for our sponsor page! :D
at 16:51 No comments:

Email ThisBlogThis!Share to TwitterShare to FacebookShare to Pinterest
Labels: half marathon, Nephrotic Syndrome, NeST, run to the beat

something for the weekend.... 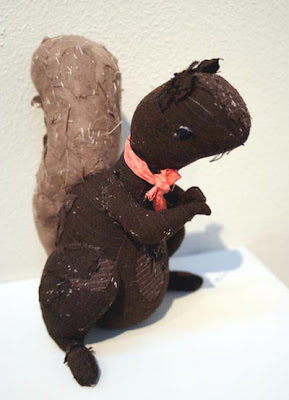 My talented friend Abigail Brown has teamed up with Craig Goode to create this lovely video to celebrate 100 issues of IdN magazine.
The music is so well suited and is by a folk singer called Magpahi
click here to view
Have a great weekend everyone! I'm off for some 1950s fun for Rahrahs hen do!
at 15:45 1 comment: 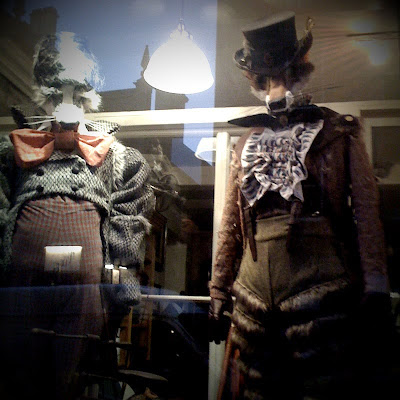 I love these!! Tweed clad badger and fox!
They were in a window display in Edinburgh....its not a great photo as it was dark and I only had my phone. But you can see and read more here as they're created by an Edinburgh College of Art student called Lizzie Povey.
at 22:40 No comments: 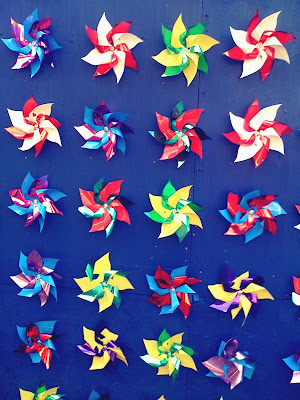 The Edinburgh Fringe is the world biggest arts festival. There's so much to see and do!
I only had 2 nights there once I was back from Poland
but I would LOVE to go back next year for more. 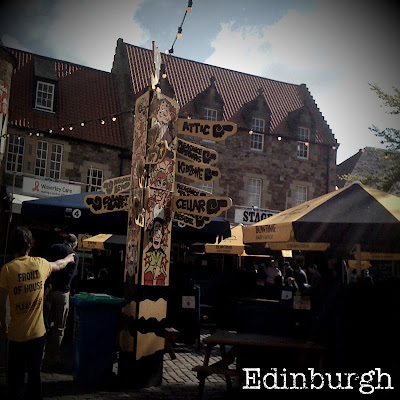 I was lucky enough to tag along with best friend who was there with work, so we saw lots of shows put on by people she works with. John Luke Roberts and Kevin Eldon were highlights.
I'm inspired to go to more stand up...
luckily there's a new comedy place opening up in Nottingham! 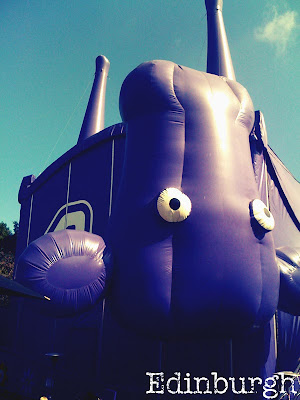 I felt very fortunate to have the chance to go with someone who knows where they're going as well as staying in a very lovely apartment! 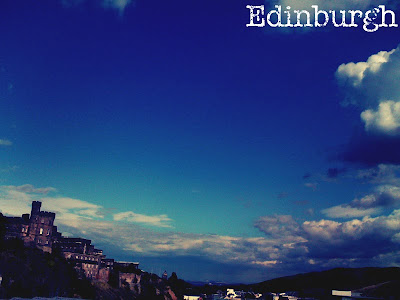 I hadn't been to Edinburgh since I was a kid so it was great to spend some time there.
Its a very beautiful city...I will certainly be returning, Fringe or no Fringe!
A fantastic end to my break!
at 22:38 No comments: 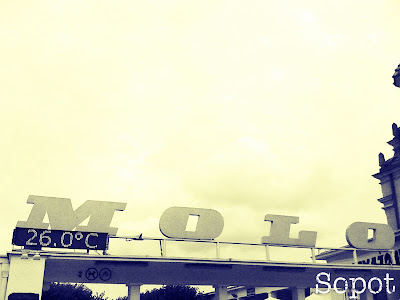 Our sleeper train arrived in Gdansk and we headed straight to Sopot. Its known for it's nightlife and very long pier...longest in Europe! Its called 'Molo' 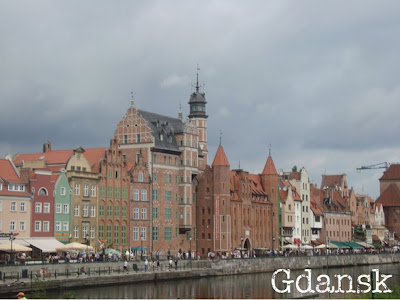 We had a day out in Gdansk which despite being heavily bombed in WW2 looks very pretty. They saved all the bricks from the rumble to re-build the buildings!

We had a lovely time in Sopot relaxing on the beach and eating lots!
We were lucky to have plenty of sun...though one late afternoon a storm arrived...this little boat is heading straight for it!... 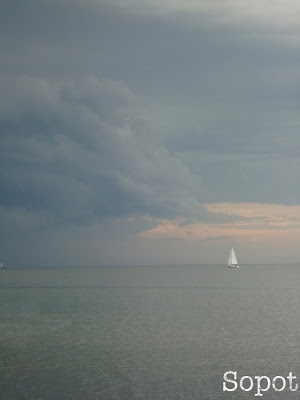 Time for some holiday snaps....we started off in Krakow, a lovely city with plenty to see including a castle where they were kind enough to make a 'B' just for me! ;) 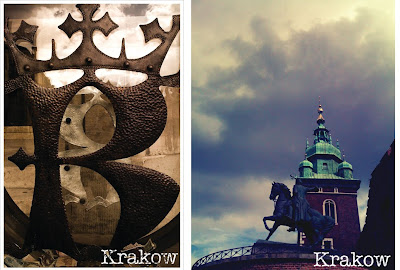 We made a couple of days trips, including to Auschwitz
(which was shocking, harrowing, upsetting...I certainly wouldn't go again but I'm glad I've been, I felt it was important to go)
and a huge salt mine which was impressive in parts... but mainly a little dull like a bad school trip....the photo below is a church made totally of salt, including the floor and the chandeliers!
I tasted a wall and it was salt! 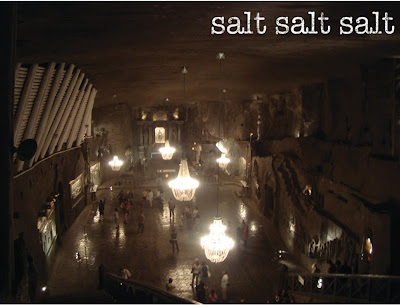 They were celebrating 100 years of scouts in Krakow while we were there....
I've never seen so many scouts! I think a gathering of scouts is called a Jamboree!
We got speaking to a local who told us it's quite cool for teenagers to be scouts in Poland! 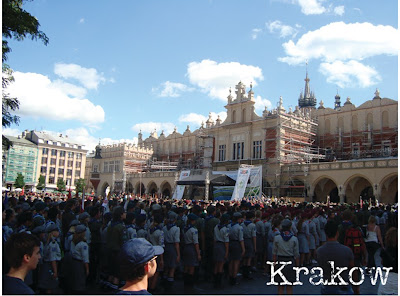 We then headed up to the coast on a sleeper train...which was a fun experience. Our cabin was very basic but I really enjoyed waking up in a new place! Especially as the sun was out!
Ed was expecting it to be a little bit like the Orient Express!
I really don't know where he'd got that idea as he knew how cheap it was.
He'd even brought a tie with him for the restaurant carriage! ha ha!
at 21:39 1 comment:

UNLESS STATED OTHERWISE ALL WORK ON THIS BLOG IS OWNED BY BETH GUNNELL DESIGN LIMITED. PLEASE DO NOT ATTEMPT TO COPY OR USE THE ARTWORK SHOWN WITHOUT PERMISSION.

find me in the Print & Pattern book!

check out these lovely blogs